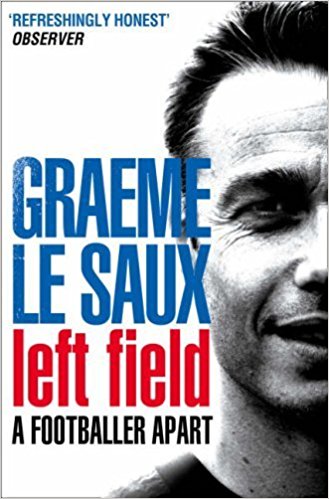 It was several years ago when I read this book. Thanks to the former England defender’s vivid and honest account, I still remember some of the contents. I was following Manchester United and Blackburn Rovers when both clubs were at the top of their form. That was the time when I noticed the good performance of Graeme Le Saux, particularly the time when he and his teammates put on the British brand Umbro’s England jersey.

He was honest to say in this book that the facilities at Stamford Bridge back then could be improved. At the training ground, he and his teammates usually stopped playing and stood at the field to show respect when a funeral procession was passing by. When Glenn Hoddle was selecting the England 1998 World Cup squad, Paul Gascoigne was left out and the veteran midfielder was very disappointed. Alan Shearer was in his prime years when Blackburn Rovers were competing for league title with Manchester United. That was the time when Chris Sutton, another striker, joined Rovers. Le Saux also revealed that Shearer and Sutton were not on good terms with each other. One mountain cannot hide two tigers, as the Chinese saying goes.

Things went south very quickly after Blackburn Rovers won the 1994/95 English Premier League title. They were eliminated at early stage of European Champions League and Shearer transferred to Newcastle United, while Le Saux headed for Chelsea. Then Blackburn manager Kenny Daglish was playing golf everyday to run away from the pressure of managing a club after winning the title. Le Saux was doing well when playing for Chelsea and England. He tied the knot with his Argentine girlfriend and the couple had a son and a daughter. This refuted the rumour in the football circle that he was homosexual. Le Saux attended university and was known to be a reader of left-leaning The Guardian. To be fair, if I were Le Saux, I would also find myself to be unfitting among players who mostly hadn’t attend university.

A short paragraph was kind of eye-opening for me was that Manchester United was one step away from signing Shearer who was leaving Blackburn. The former England striker decided to join Newcastle United and scored many fantastic goals.

This is not a day-to-day-record type of autobiography. If you want to know more about the 1990s football stories in England, this is the page-turner for you.